How Much Fun Can You Have for $500 at Spearmint Rhino Las Vegas? 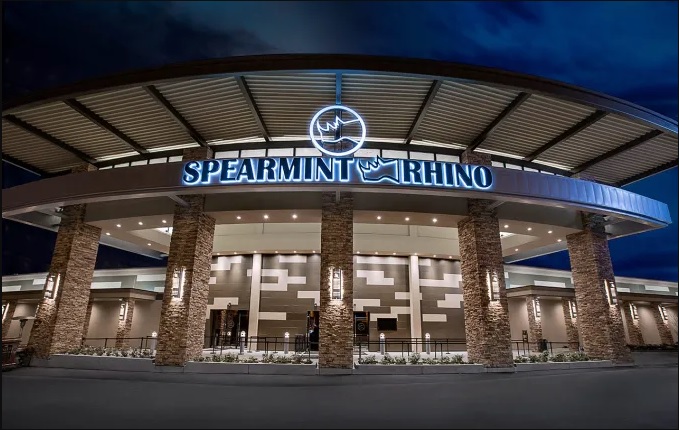 If You’ve Got $500 to Spend, Can You Have a Good Time at Spearmint Rhino?

We’re making an effort to re-visit every strip club in Las Vegas, as much has changed since the pandemic. We’ve given ourselves a bankroll of $500 per location, as we feel that you should be able to have a good time at a strip club with that much money.

Our first visit was to Spearmint Rhino, probably the most famous strip club in the world.

Here are our impressions.

It was a Monday night, so we cruised Las Vegas boulevard to gauge how busy it was in town. To our surprise, it appeared fairly busy. So off to the club we went.

We parked ourselves, to save some coin on valet, as the parking lot was fairly empty. Approaching the door, we were greeted by two doormen and submitted to the customary pat-down and metal detector wand treatment.

Once inside the front door, we went to the hostess window on the left. We had to pay a $43.62 cover charge, which was weird as it was completely dead as far as we could tell. But hey, we’re tourists right, so we just pay the lady and put the change from a fifty in her tip jar.

We also cashed $30 into singles so we’d have money for the tip-rail. To our surprise they charge 10% for singles, so be sure to bring your own (you won’t need them as we’ll discuss below.)

Next, we were greeted by a floor manager and introduced to a beautiful young lady. We were escorted to a table and the waitress came over. It appears this is a way for them to double their drink revenue, as it’s kind of implied that you buy the lady a drink, even if she’s not your type. So now we’re down another $20 for two small Redbulls and gave the waitress a 20 spot to set the tone that we had money to spend.

It also felt like this is where we were “supposed to sit.” It took a long time before we got up and walked around, realizing that what we thought was a VIP-only bar, was just another section of the venue, and happened to be where a lot of the hot dancers were hanging out.

Our tip is that when they greet you with a lady unless she’s your type, politely decline and tell them you’re headed to the bar. You save $10-$20 on buying the lady a drink, and 15 minutes of chit-chat before she starts pushing you for dances and you tell her you’re just “hanging out.” If you have no problem being in the awkward situation of not paying for her drink and telling her to leave you alone right away, go for it. But for us, it seemed like it was worth the cash to have some conversation, let the girls know we have money to spend, and take in the club without being interrupted for a dance every 5 minutes.

As we sipped our Redbull, we noticed something weird. The entire main stage was surrounded by two-seat tables marked as Reserved VIP. There was literally nowhere to sit at the stage. The only approach was a small standing area to the left where we suppose you could walk up and lay down some dollars. But the entire time we were there, we didn’t see a single person approach the stage. We didn’t see a single dollar laid down on stage either. So we wasted $3 turning our thirty bucks into singles.

How Much Do VIP Dances Cost, Actually?

During our time sitting on the floor, we were approached by at least 7-10 dancers, asking if they could sit with us. For the most part, we told them no thank you, but twice we agreed. We were trying to figure out how much dances cost, and our first attempt was a failure. We were speaking with an absolutely gorgeous beauty but there was a communication barrier. All we could figure out is that she was pushing $400 for an hour in the VIP room. This would obviously blow our budget, so we declined and she left us.

The next girl we spoke to, we didn’t actually invite to the table, she simply sat down and started chatting us up. She had such a good personality, we rolled with the punches, trying to get info on dance pricing. Here’s what we know to the best of our knowledge

At this point, it was time to head to the men’s room and freshen up, and decide what to do. The bathroom was clean and staffed by a valet, so we made good use of our singles and threw them in his tip jar in exchange for some chit-chat about why the tip rails were blocked off. 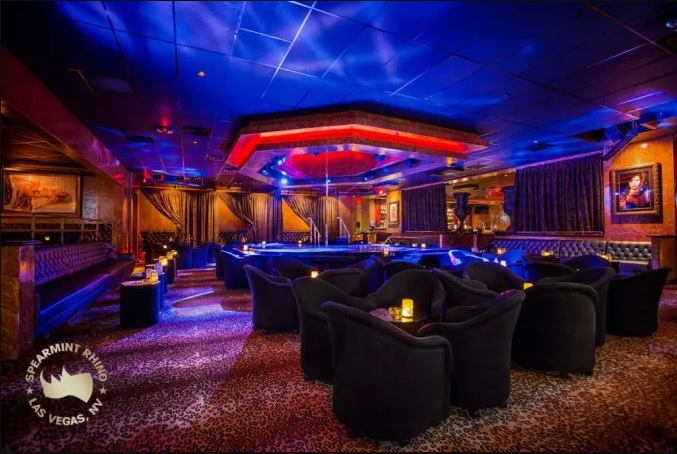 We had seen one girl doing lap dances on the main floor. She wasn’t the hottest girl in the place, but she had the curves we liked and looked like she’d be a fun time. Unfortunately, the first time we saw her, she was off to the VIP with another customer, so we didn’t know what our next move would be.

As luck would have it, as we were walking out of the restroom, she finished talking to her VIP, so we moseyed over to see if she was free. Instantly she was very friendly and we agreed to do a half-hour for $200. We paid her cash as we entered the VIP area and tipped the VIP Dance bouncer $20.  Next we had to pay the $50 for the two drinks, and tipped the waitress, who was smoking hot, another $12.50.

Our dancer said she wanted more money to “do more” so we gave her a $100. Was it worth it? Probably not, but we’re going back and next time we’re bringing a GRAND!

Spearmint Rhino is a world-class club. The strippers there are top-notch, no matter when you visit. The staff is professional and helpful. It’s a great time if you have lots of money.

We don’t like being force-fed a girl when we walk in the door. We get it, a lot of guys will sit alone in a strip club, sheepishly sipping their drinks, and may not approach any of the girls and leave. That’s why you have the tip rail open on stage. So shy guys can sit down and throw some singles at the girl to get some attention. Let the girl strike up a conversation. Get the guy to do some dances, to buy a bottle. Let the girls do the selling, not the floor manager.

Yes it’s a great club, but they’re resting on their reputation and missing out on the basic operations of a successful strip club.

Want to know our current favorite club? Check it out.

We are fully licensed with the state of Nevada, so you can be sure you will get the service you deserve. All employees must pass Nevada Sheriff's Dept background check and have fingerprints on file. We hire only the best service professionals for all our positions.